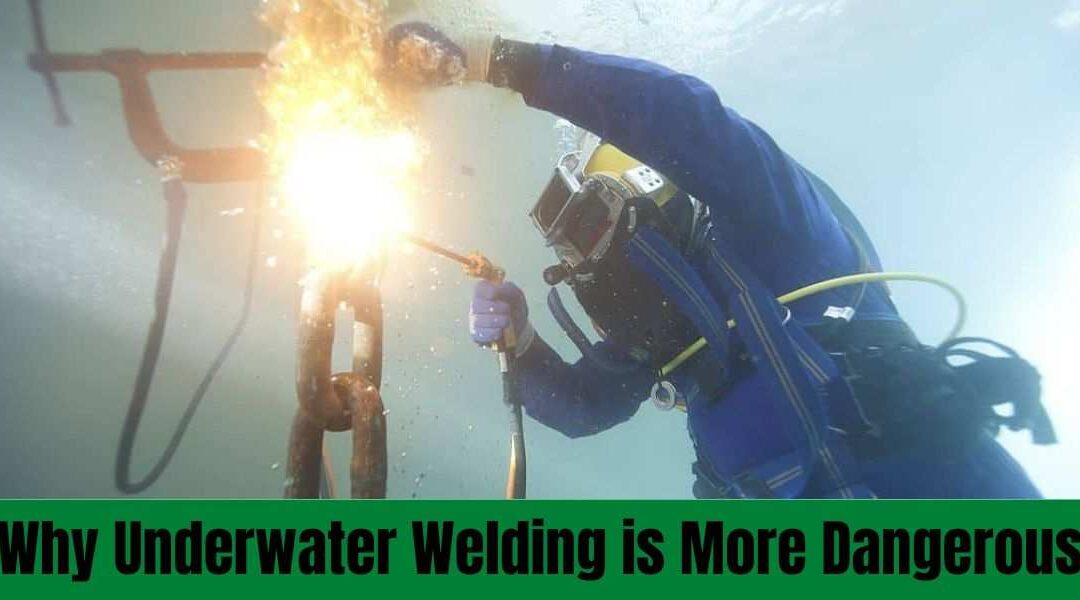 Underwater welding is a well-paid profession. It provides welders the opportunity to travel and adventure in the world. But it’s one of the most dangerous jobs around the globe. Many people don’t know why is underwater welding so dangerous, you can get an idea from the death rate of underwater welders. Underwater welders face various risks due to operating operations in cold, deep, and dark places. The injuries often lead to long-term disabilities and even cause death.

Also, keep in mind that most underwater welders did their job for 10 to 15 years on a commercial basis. There are many reasons behind it. Sometimes, they are affected by diseases by spending long hours in the deep sea.

Why is Underwater Welding so Dangerous?

There are many reasons why underwater welding is a dangerous occupation. Welding in the bottom of the sea produces pressurized oxygen and hydrogen gas. There are huge chances of lethal explosion when both gases combine in concentrated amounts. Many underwater welders work hundreds of feet below sea level. Moreover, they have to face immense pressure at such depth of water in the sea.

There are also many other factors that make underwater welding dangerous, therefore it will lead you to think about it before adopting this profession. Before choosing underwater welding, you must know the life expectancy of underwater welders. Because it will help you to get a clear idea of whether it is the right profession for you or not. One thing that is vital for underwater is that they need to be very skillful at diving and welding.

What is the Life Expectancy of Underwater Welders?

The two most important variables of keeping welder-divers safe include proper training and safety regulations. We know that commercial diving is a dangerous profession.  But it’s necessary, just like topside construction. In 2014, the United States industry report was published and it showed that underwater welding is a risky occupation.

Industry reports show that the underwater welding death rate has a high fatality rate estimated to be around 15%, making it 1000 times more dangerous than working as a police officer. That does not include the severe and permanent injuries the workers suffer. Underwater welding jobs offer the most attractive salaries because the field of work is inherently dangerous, with welders facing long-term health issues and injuries.

According to Occupational Safety and Health Administration (OSHA), the U.S records an average of 6 to 13 commercial dive fatalities every year. From these stats, you can get an idea about the life expectancy of underwater welders. I hope now you have a clear understanding of why underwater welding is more dangerous than other welding operations.

There are many risks associated with underwater welding, but here we mention some top of the risks that underwater has to face in their profession.

Risk as a Commercial Diver

Commercial divers are exposed not only to the possibility of drowning but also to a variety of occupational safety and health hazards such as respiratory and circulatory risks, hypothermia, low visibility, and physical injury from the operation of heavy equipment underwater. These are some of the reasons why underwater welding is so dangerous.

The most common injuries and causes of death were drowning or asphyxia due to inhalation of water, air embolism, and cardiac events. There are several other dangers also, some of which might be deadly, while others could have long-term consequences.

Even though underwater welders are rarely attacked by wildlife. But there is a possibility of encounters with sharks and other sea creatures that might be deadly. So, it is vital for an underwater welder to keep all safety equipment with him.

When the body is subjected to a low temperature underwater, the cold water conducts heat away from the body. The loss of heat can cause organ failure if the body remains cold for too long. Wearing a proper underwater dress protects the body from these exposures.

For underwater welding, most operators used heavy welding equipment and flame. Therefore, there are huge chances of electric shock. Electrocution is another type of accident that may happen during underwater welding. Water provides little resistance to electricity. In this way, current flows freely from ungrounded sources. The welding arc may be unstable and uneven in freshwater and doesn’t make contact with the metal when wielded.

The risk of electric shock is significant if an unskilled diver is dealing with the arc. The workers who work in shallower water face less risk than those who work in deeper water. Therefore, it is recommended to use proper equipment while underwater welding, such as double pull switches, waterproof electrodes, etc. The most important thing before driving is that equipment should be used and tested. These safety measures help to increase underwater welders’ lifespan.

Risk of an Explosion

The configuration of gaseous pockets from combining oxygen and hydrogen gases can lead to an explosion. These pockets create a sound that oxygen and hydrogen accumulate with each other. In this situation, a welder needs to find the location from where the gases are coming. Immediately stop working on it and move himself to a secure place

Here are some rules to save from explosion

While doing the operation, underwater welding affects the sea ecosystem in many ways. It involves

Some of the deepest depths underwater may be down to 2500m. This depth may expose the divers to a host of potential like

The partial pressure of the nitrogen in breathing gets hired, when the wielder goes down underwater. The human body doesn’t use metabolic activities, so the gas is saturated as tissue. The welder ascends quickly from high-end to low-end pressure. The nitrogen comes out from the tissue. This can cause bubbles into the tissue and chunk the vessel of blood and may lead to death or paralysis attack. When the diver ascends to the surface too quickly, this condition may occur to avoid these conditions.

The welder maintains the following parameter for the upcoming welding

Is underwater welding the most dangerous job?

Yes, it is a dangerous and deadly occupation. The death rate for underwater welding is around 15% per year.

Is it possible to die while welding underwater?

Yes, there are huge chances of death while underwater welding The most common cause of death is electrocution and drowning.

What is the leading cause of death while underwater welding?

The main causes of death are drowning, explosion, and electrocution. Most underwater welders die due to these reasons.