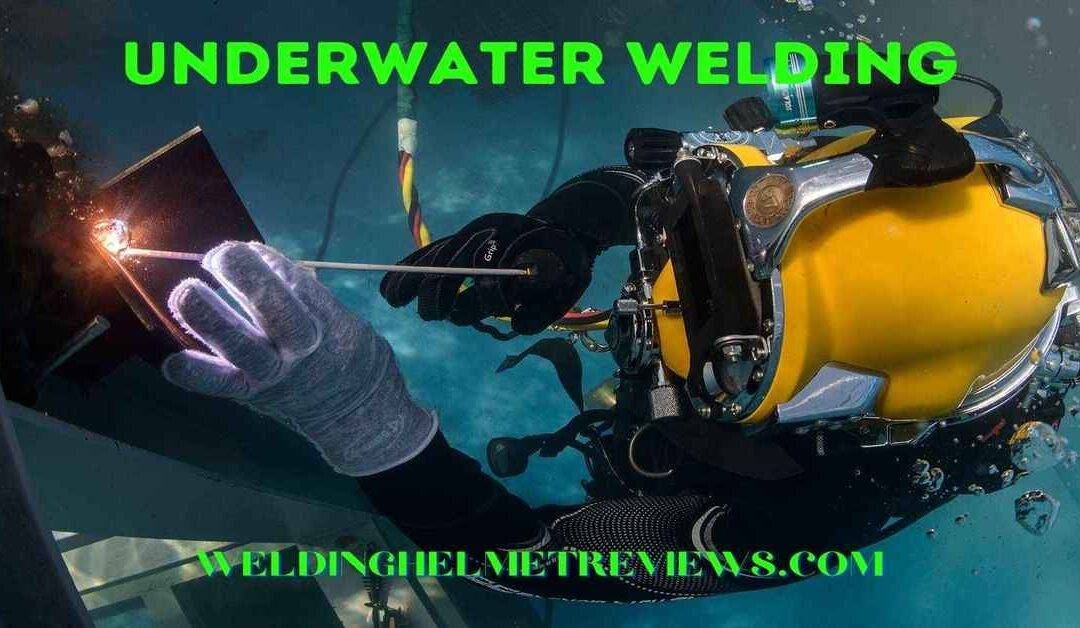 Underwater welding is the process of welding at elevated pressures, normally underwater. This type of welding is also known as hyperbaric welding. It is performed while the welder is submerged, often at elevated barometric pressures. The two categories considered are dry welding and wet welding. In dry welding, the welder welds in a dry environment and creates it by placing a hyperbaric chamber. In wet welding, the welder dives into the water to do welding using a specially designed welding rod. You should keep one thing in mind underwater welding is not an easy task, many welders die during this job. Here we discuss the death rate for underwater welders in detail.

Death Rate for Underwater Welders and their Life Expectancy

Do you really wonder about the life expectancy of underwater welders??? Well, due to the high chances of fatalities, it is short! The previous research founds the estimated average age of an underwater welder to be 35-40 years, as compared to the general human life expectancy to be 72.6 years. The high risks causing long term injuries or deaths impute to it. Welding itself can be a threatening profession and combined with the dangers of diving into deep seawater, the certainty of injury and death worsens. Not for the faint-hearted, the job requires not only elevated skills and expertise but also hard-headedness, focus and infinite concentration.

Underwater welding jobs offer the most attractive salaries because of high fatality rates. There is also an imperative question that how much underwater welders make in a year. According to commercial divers and global statistics, the average welding underwater salary is $53,990 annually and $25.96 per hour. Most of the incomes hover around $25,000-$80,000. Diver welders in the top make $83,730 while the extremity drags $30,700. In a total population of about 10,000 underwater welders, the scope of work is huge and hence the salary is almost guaranteed.

Because the death rate for underwater welders is high compared to other kinds of welding and other professions. Therefore, it is ranked as America’s deadliest maritime job and occupation. The work requires the divers to have extensive training and experience to follow specific safety protocols before and while performing the tasks. In addition to receiving highly specialized training, welders should be kept under strict supervision and given appropriate and well-maintained equipment. The death rate should be a guiding principle to know the liability and necessity of trade.

How Often Do Underwater Welders Die?

You are still scratching your head, wondering whether this job would work for you? Well, due to the high hazard connected to the trade, the safety statistics are denoted by a welding underwater death rate. Out of 3000 full-time welders, 5 lose their lives annually. This translates into about 50 deaths out of 1000 in underwater welding life expectancy term of a welder. And this is pretty high!

But with the advanced use of technologies and safety protocols, the death rate of underwater welders has gone down. As per older records and present statistics, around 11 underwater welders die each year. As this profession is attached to hazards, for any diver, there are risks of decompression sickness, hypothermia and drowning in the event of an equipment failure. Welders are posed to the danger of electric shock, muscle aches, memory issues and cognitive ability.

Because the diligence of the job can be pretty demanding and the risks can be many, we’ll clarify the risks welders face every day and explain how incidents happen and point out a few critical notices to be considered fully. By the end of the article, you’ll become acquainted with and be able to tell it is worth the risk!

Why Do Underwater Welders Die?

Decompression sickness also called generalized barotrauma or the bends refers to injuries caused by a rapid decrease in the pressure that surrounds you, of either water or air, while moving between different pressure zones.

Divers use extra oxygen and nitrogen, where nitrogen and other harmful gases dissolve in the blood. As the diver swims back to the surface, water pressure changes. If water pressure changes too quickly, nitrogen separates from the diver’s blood. That way, nitrogen forms bubbles in blood and tissue. Dangerous bubbles causing decompression sickness are the leading cause of fatality. And the symptoms are:

Treatment is usually hyperbaric oxygen therapy in a recompression chamber and has a high recovery rate if treated early.

It occurs when your body loses heat faster than it can produce heat, causing a dangerously low body temperature. During deep commercial diving where welders spend hours in the water, their bodies are exposed to cold temperature. Low temperature can be dangerous when breathing the oxygen and helium mixtures.

If there is no adequate gas heating for an extended period, lings can freeze and the diver may suffer from hypothermia. The temperature of the body goes below 95F. Specific physiological symptoms occur like confusion, organ failure and respiratory problems; some of them can even be fatal. As a safety measure, underwater welders should always wear a properly insulated rubber wetsuit.

It can even happen to professionals. The biggest and the leading cause of death rate for underwater welders even today is drowning. Trust me when I say! Even experienced underwater welders can drown. Even by following all the safety protocols, welders can get entangled or pinned by their welding equipment when visibility drops as they dive deeper into water. There was a scientific study where 947 diving accidents between 1992 and 2003 were monitored. The study shows that 70 victims who drowned died because of diving-related injuries, equipment malfunctioning, air supply issues and cardiac arrests.

Even today drowning occur if you have a pack full of oxygen tank to wear all the required safety equipment. To reduce the risk you should stay hydrated, make sure you don’t work tired and keep inspecting your oxygen tank. The differential pressures present a unique risk to the divers, as they are not easy to detect. Once you become trapped in the flow, it becomes hard to escape. Sometimes, drowning can be caused by poorly-maintained or old gear such as oxygen tank, mask or hose.

Electrocution – Death Due to Electric Shock

The link between electricity and water is the first thing considered while talking about underwater welding. Even though the water itself is not a good conductor, but seawater contains ions of salts and metals that increase conducting properties. Welders use either alternating current (AC) or direct current (DC) power supply, insulated electrodes and the required equipment. To avoid any type of accident you must test your welding helmet before any kind of welding operation.

But, keep in mind that wet welding is much more exact science. So before welding underwater, divers take all the necessary precautions while joining metals in water. Safety measures include extra protection, a rubberized dry-suit, and specialized waterproof equipment. In addition, safety measures make commercial diving pretty safe from electric shock.

Keep in mind that underwater welding jobs also include salvage, inspections, and material installation. Therefore, all of the named jobs can be considered underwater construction. Defense Technical Information Center (DTIC) conducted a study that shows that only one underwater welder died due to electric shock. This incident occurred in 1943 in the Deep-Sea Diving School.

All the workplaces must be waterproof and properly insulated. Three factors that are responsible for causing electric shock in welders are:

Welders underwater work in many different environments, including offshore oil rigs, dams, oceans, lakes, rivers. Unfortunately, every single environment contains potential dangers that less experienced welders are not ready to deal with. One scientific study shows that 36% of underwater welding deaths occurred because of difficult water conditions. These are some of the factors that increase commercial diving risks, reduce their life expectancy and increase the death rate for underwater welders.

Underwater welders operate in some of the most extreme depths imaginable, down to 2500m (8200ft.). These unnatural operating depths may expose divers to a host of operating complications such as:

One of the rare but potential hazards of underwater welders’ death is explosions. They occur once hydrogen and oxygen combine in the surrounding water, creating gas pockets. Once they ignite, gas pockets will cause an explosion. In addition, fuel stored in marine vessels and offshore oil rigs can also ignite and lead to death or severe injuries.

Differential pressure is responsible for 7% of all reported underwater welding accidents. So that rate puts this hazard on top of the list. Delta P is standard when water moves from a high-pressure to a lower pressure area. Accidents happen when welders open a valve, cut into space, or engage a pump. The height difference between the two bodies generates a suction force. Therefore, the more significant the height or pressure difference, the more dangerous the suction force is as the power is more substantial.

The biggest problem is that you cannot detect potential Delta P situations visually. It all happens very suddenly, and trying to pull out your arm or a leg, feels like trying to lift the car with it. To reduce the risk, welders must first be aware of it. When there is a potential Delta P situation in the work area, the fluid mechanic calculation will determine the safe zone. Usually, before the work, you’ll get all the required information. However, if you still doubt, you can use Continuity Equation, Torricelli’s Equation, and the Drag Equation to calculate the safe zone by yourself.

Keep in mind that Delta P hazard is present in your domestic swimming pool or even spa, so you don’t need to be an underwater welder to be at risk. Fatalities may even occur at depths as low as 3 meters or less by the substantial suction forces present in large openings, even when there is a slight difference in water levels. Differential pressure hazards or Delta P hazards are usually identified before welding and should have the proper lockout/tag procedures in place or double isolation to protect from injuries.

There is also threat inherent in marine life such as sharks and deadly stingrays for an underwater welder to fear coupled with poor visibility, welders might snag scuba equipment on underwater hazards. Likewise, pressure changes were seen during ascent and descent, strong currents, contaminated water and trappings also lead to a certain death rate in underwater welders.

Disabling injury: By the time the rescue team reaches the diver, they are already out of the air.

Harmful/Disabling Event: Diver panics, which leads to breaking the line.

Host Factors: The main cause is the level of experience. Sometimes behavioral dysfunction is accounted for.

Underwater Welders Death Rate – How Risky is It?

Various studies show different death rates for underwater welders. The first one was released by the Center for Disease Control and Prevention (CDC), which published the data monitored between 1989 and 1997. According to their numbers, there was an average of five underwater welder deaths in nearly ten years.

While the Bureau of Labor Statistics does not track fatality rates of underwater welders, a study conducted in 2018 shows that for every 100,000 workers in the US, about 3.5 of them die on their job every year. The study identified five jobs that come with potential risks. Underwater welding was listed as the top dangerous profession with nearly a 15% fatality rate, followed by aeronautics with 5%, logging with 0.13%, fishing with 0.12%, and airplane piloting with a 0.07% fatality rate.

How many underwater welders die each year?

According to recent searches, there are about 11 underwater welders die each year. The main reason for the high death rate for underwater welding is drowning.

Do underwater welders get attacked by sharks?